Within hours of arriving in London, my best friend saved my life. We were crossing the street near our hotel. I looked before I crossed the street, but in a foggy, jet-lagged state, I'd forgotten that the traffic was going to come from the opposite direction. I looked the wrong way, and a double-decker bus lumbering up the street nearly took me out. Luckily my friend was paying attention and noted my danger. She pulled me out of the street thus saving my life and the trip I'd saved for for months.
The jet lag had complicated an already disorienting situation.

I thought of this incident as I reflected on the day I walked my route backwards. I set out in the direction that is usually the end of my walk. I didn't think much about it as I set out, but as the path unfolded before me, I recognized the disorientation of my near-disastrous British street crossing.

Changing directions changed my perspective on everything I see every day. I was now walking into the sun rather than walking with it warming my back. I found myself walking down hill on streets that are usually uphill. I'd gotten use to the exertions of walking uphill, so walking down hill felt strange and a little more difficult than I'd expected.

For a second time in a week, I watched another long vehicle attempt to make a tight right turn. It wasn't quite as graceful as the semi driver's performance, but at least this driver avoided taking out a light pole. What are the odds that I would see two such vehicular spectacles in the space of a few days?
The fountains usually greet me at the beginning of the walk, but this day, they would be the dessert. And then as I approached, I saw this: 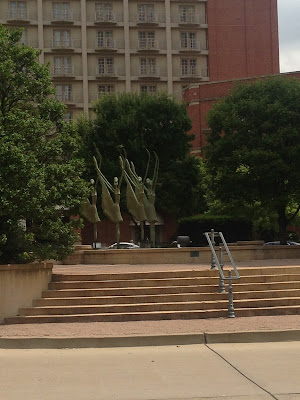 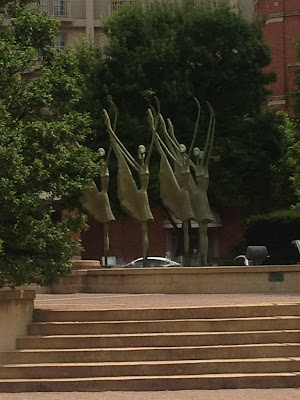 The water wasn't running. I have grown so accustomed to the power of this water that I was crestfallen. The ballet dancers are beautiful sculptures, but the water makes them breathtaking.
Sometimes when I get bored with the way I've been doing things, I mix things up. This happens most when it comes to the route I drive to or from work. The change of scenery changes my thought patterns. The thought patterns seem to be what bores me, so this strategy works. Generally when I take on a new route, I feel adventure and a sense of my world expanding.
The backwards walk didn't feel expansive. It felt smaller. The disorientation was unnerving. I was having difficulty coming up with what the deeper meaning of this walk in reverse might be. So I slept on it. This morning in the shower (where the great thinking really happens) it came to me: trying new things is good, but so is sticking with the things that feel right. I've spent much of my life adjusting to what works for the people around me. It was a function of people pleasing. Those actions never felt right, but I did them out of habit. Today I know that doing what feels right--for my body in yoga, parenting my child the way that's best for her despite what others assert, and taking walks in the direction that feels most meditative--is the very best way to live a life.
I haven't repeated the walk in reverse since that day.
Posted by Julie Steele at 4:48 AM

Email ThisBlogThis!Share to TwitterShare to FacebookShare to Pinterest
Labels: #write31days