I had so much excited energy on the day before the 5k I may have set the cruise control and tapped my foot all the way to Indianapolis. I called my sister en route to ask her husband, a physician, and my running partner, what chemical was coursing through my veins. I was hopped up on something, and it was GREAT! I had no idea that adrenaline would kick in so early.

My sister has requested that as I recount all of my novice observations that I add the bit about me asking if the race packet included safety pins. I thought it was a reasonable question, but apparently it demonstrated my newbie status.

Our travel was delayed by construction on and off the entire drive. Rich and the family picked up my race packet for me, and we met at the hotel shortly after. Rich presented me with the long-talked-about socks. He called them "Perfectly you and totally bi#$in." After receiving the gold and blue "Bookworm" socks, I absolutely agreed! 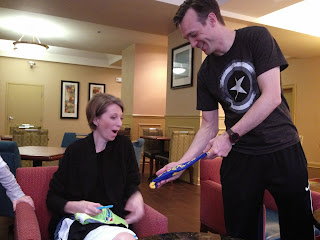 My mom and sister kept whispering some race-related information in my daughter's ears. Top secret stuff I was told.

We visited with family for awhile, carried out a dry turkey club from the Hard Rock Cafe across from the hotel, and got to bed later than I would have liked. Motorcyclists provided us with a cacophony of sounds that made falling asleep very difficult. Around 3:00 a.m. I woke myself up with a coughing fit. I got up and dressed for the race about 5:30, ate oatmeal, drank grapefruit juice and tea, and then Rich and I began our walk downtown to the start of the race.

But not before a few pre-race photos:

Showing off the socks 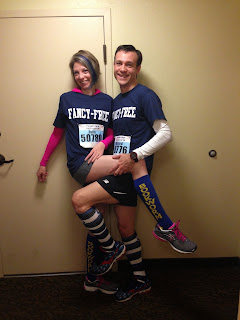 And the backs of the "Team Fancy Free" shirts Rich made us. (Rich has been singing a made up song with the phrase Fancy Free to me for nearly as long as we've known each other. He observes what I'm doing in a particular moment, reading, washing the dishes, etc. and then sings that I'm doing it "so fancy free." That is the back story for our team shirts.) 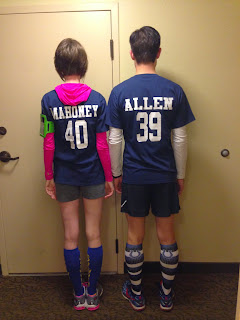 We followed the crowd down to the starting line. There were so many people. We made our way to the "5k R" area, which was in front of the "5k W." We took a few more photos, but generally I just wanted to live in the moment and take in everything. Really great music was playing over the loud speakers, so I warmed up by bouncing to the beat. I was amazed at how not cold I was given that I was wearing shorts and it was in the low 50s. We were surrounded by a sea of humanity, so they helped keep me warm. 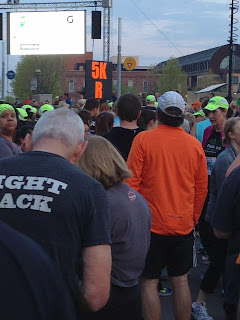 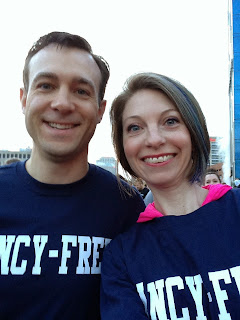 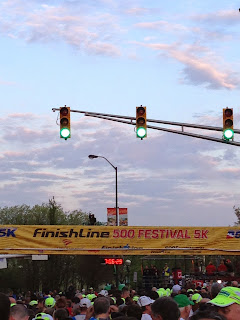 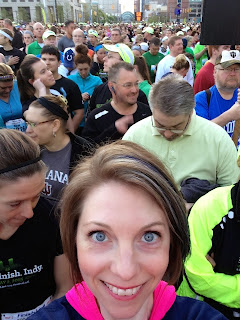 Rich had a friend running the mini-marathon after our race, and by some stroke of luck, Bob was able to find us in our corral and wish us good luck. The Indiana state song was sung, the countdown began, and we were off. I was not prepared for how much dodging of walkers we were going to have to do. When the path cleared some I realized that I had been running on the balls of my feet. I lowered back to my heels and felt tightness in my calves.

Rich reminded me to set the pace I was comfortable with and he would run by my side. The following is a bulleted list of the things I observed, thought, said, or experienced during the race:

*There were all kinds of bands and groups on the sidelines playing music and giving encouragement. Rock, military band, Rock band with a French horn, gospel, belly dancers, DJ with hip hop "Welcome back everyone! We're so glad to see you. This is like an anniversary for us. You can do it!" There was a Christian man with a mic who was telling us that the most important thing we could hear this morning was that Jesus was our Lord and Savior.

*I was not prepared for how many young kids there were running with parents. It was definitely motivating.

*Rich kept track of our time and our distance with his Garmin watch.

*I was stunned when he first told me I was maintaining a better than 11 minute mile.

*The running community is a supportive one. People looked out for each other. I loved the volunteers cheering us on and immediately thought, "Cadence and I are going to volunteer."

*Rich and I carried on some conversation in spurts, but mostly I looked a few paces in front of me, concentrated on my breathing, and plowed forward.

*He confirmed that I was indeed a reasonable running partner and that he would do another race with me.

*Around this time, we also hit an incline and I could tell that I was wearing out and slowing down a bit.

*I was also grateful that there was no wind.

*We observed one guy bark at his wife/partner when she stopped running. He said a few discouraging things to her and resumed running. I was even more grateful for my running partner.

*Knowing that a longer race was happening after ours, that helped me keep perspective about the race I was running. It WAS a marathon for me, but to behave as if it was would be ludicrous. I was grateful to have that perspective and to keep my head in check.

*The thing I will remember most about those minutes with my brother-by-marriage was what he said to me as the finish line emerged: "I am really impressed with how seriously you took training for this race. You set your mind to not stopping, not doing it half-assed, and you are doing it. I am so proud of you."

*As the finish line got closer, and I could hear the music again, I looked up and saw the time. We were under 36 minutes. All of a sudden, I felt compelled to power through to get an even better time. The thought crossed my mind that I was fatigued enough that my legs might buckle, but they didn't. I finished the race in 33 minutes!!! 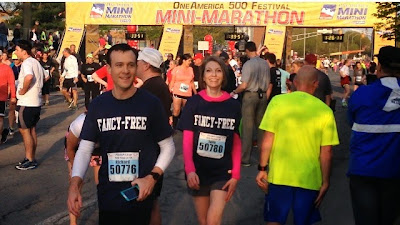 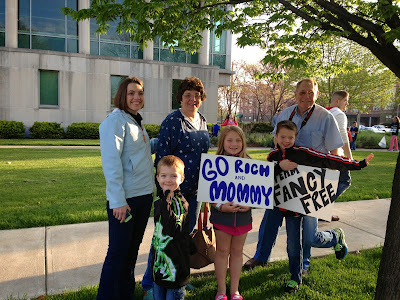 We met up with our cheering section holding the top secret signs that they'd made the night before. And that's when I started crying. I said, "I beat my own personal record." I hugged my daughter and nephew first and then my parents and sister. It was a glorious moment. I was so unbelievably proud of myself and so happy to have had people there to witness this milestone. Rich and I continued walking towards the volunteers passing out the medals and then collected our post-race foods. The gatorade was atrocious and had to be washed down with water.

We had no problem reuniting with our family which is amazing given the throngs of people. I told them more about the race, we took more pictures, and took in the sights of the post-race party. We looked at our phones. It was only 8:15, but it felt like 2:30 in the afternoon to Rich and me. 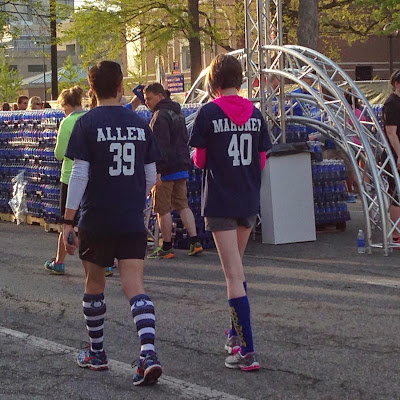 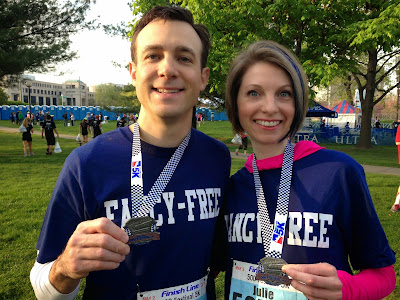 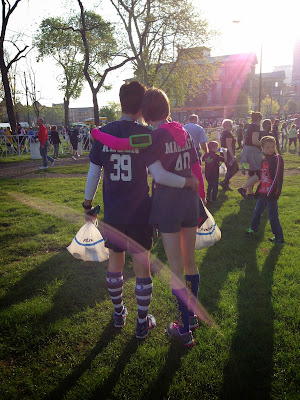 All eight of us headed back to the hotel so Rich and I could eat another breakfast and have showers. Never has a hot shower felt so good! We spent the rest of the day celebrating my oldest nephew's 8th birthday.

Take aways from this experience:

*I am exceedingly proud of my effort and training.

*I set a goal "Run the entire race." And I accomplished it.

*I am more determined than I previously knew.

*Slow and steady wins the race.

*I want to keep running and doing 5ks.

*I ran my first post-race run today. Just because I wanted to.

*I have a new level of appreciation for my skinny body. It is strong. It carried me ably through my first race. People can think what they want. I am lean and healthy.

*I am being transformed by this 4040 experience.
Posted by Julie Steele at 6:48 PM