I have procrastinated writing this post for more than two weeks because honestly writing about James K. Polk, U.S. President No. 11 seems about as exciting as reading about the man. That's a wordy way of saying I didn't enjoy learning much about Mr. Polk. But I am excited to cross off another item from the list, so my motivation has been reinvigorated.

Here's a bulleted list of some of the things I learned about American history whilst reading this short, but looonnnnggg, biography:

*Polk's presidency was made possible when the two presidential front runners, Martin Van Buren (for re-election) and Henry Clay (long time presidential aspirant and total grouch) spoke out against annexing Texas. They were out of step with what Americans wanted and their outspokenness cost them their careers.

*In the vein of "some things never change," Toqueville visited from France and "concluded that "religious insanity is very common in the United States." Separation of church and state, in those days as now, did not keep preachers out of politics."

*"Somehow he [Polk] is the least acknowledged among our presidents of great achievement, which is somewhat mystifying. He boldly exerted the influence of the presidency in both foreign and domestic affairs. He threatened war with the British to take from them a major share of the Oregon Territory, waged war against Mexico to grab California and New Mexico, and increased the landmass of the country by a third, creating a continental nation that reached from ocean to ocean. He reduced the tariff, permanently stripped public tax funds from the unaccountable and often corrupt control of private banks, and created an independent Treasury that was viable for more than 60 years." (page 1)

*One of the reasons, I'm not a fan of Polk: "Yet over a career that ran more than a quarter century, as state legislator, U.S. Congressman, Speaker of the House, governor and president, Polk seemed TO GROW OR CHANGE LITTLE AT ALL. [All caps are mine.] He knew what he knew about traditional Republican orthodoxy satisfied that he was true to his beliefs, and thus concluded he was indisputably right." (page 2) Boo to not growing or expanding one's experience. However...

*Here's something I can admire: "Polk believed that if democracy was to have meaning, the great mass of people were as entitled as the wealthy few to vote and to serve in high offices." (page 29)

*"...Harry Turman published his list of eight great presidents and rated Polk, chronologically, behind Washington, Jefferson, and Jackson. "A great president," said the thirty-third chief magistrate of the eleventh. "He said exactly what he was going to do and he did it." (page 103) Yes, Mr. 33, but at what cost? Dare I ask.

*And finally..."Polk left office with no iconic image, no host of hero-worshipers, no hordes of admirers sated with his charisma. If his administration approached "greatness" - and most...agree that it did - it was on the basis of performance alone." (page 155)

So there you have it. A brief snapshot of the notes and quotes I copied as I read this biography. I believe I have entered the "boring stage" of this writing project. I am undeterred. I will trudge on, but first I will read more Anne of Green Gables and the book I've chosen from the high school reading list first. When those are complete, I'll be able to check off numbers 10 and 22 as well. 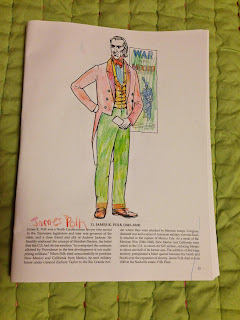