Response from a Missouri Representative

Four summers ago my job of nearly ten years was eliminated. It was a shock. I'd built a great network of colleagues and friends and had an opportunity to do really interesting things in that decade. It was also a stressful existence, and one I hadn't had the fortitude to change on my own. Within hours I began to feel that the job loss was a gift, an opportunity to move on to bigger and better things.

I spent my time that summer divided between job searching, spending extra day time with my precious four-year-old, and asking the deeper questions, “What am I here for? What is my purpose?” Somewhere along the way, the idea that my letter writing was a divine gift came to me. I had been writing letters since my stationery had Cabbage Patch Kids on it. I had always considered it a quirk of mine. Evidence that I had been born in the wrong century.

That summer something told me to stop disrespecting this gift. To be unapologetic about the letters I wrote. To consider it a form of ministry. And when I did, everything changed. Letter writing became a lifeline for me and for my recipients. It became a way of trusting my gut. People come to mind and instinctively I know when it's time to write them. Often times I have no idea what is happening in their lives. I just send a note saying they are on my mind and I wanted them to know. I share good things that are happening in my life. Other times I share things I'm struggling with—a form of letting them know they aren't alone if they are struggling.

Time and again since that summer I have heard from recipients who tell me, “That letter came just when I needed it most.” How in the world would I know that? That's the beautiful thing, I generally never do, and so that's what amplifies the fact that letter writing is my divine gift. And when I take it seriously and respect it, my letters can be used as a force for good in this wonky world.

I don't keep track, but I estimate I write somewhere in the neighborhood of 100 letters a year (not including my Christmas and Valentine mailings.) I love receiving letters in return, but I never expect it. Getting a letter in return isn't the reason I send them. I am filled with joy every time I send a letter—that is reward enough. Often I get an e-mail or Facebook message acknowledging that my letter arrived and I always appreciate knowing that the postal service did their job reliably.

Having said that, receiving a handwritten letter or postcard in the mail always makes my day! I love love love getting mail. I always have and always will. So you can imagine my shock and delight when I retrieved my mail late in the evening and found this little gem waiting for me. 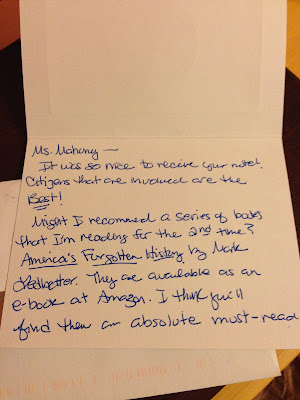 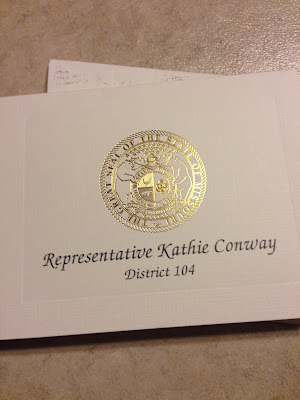 Number 24 on the 4040 list was to write four letters to legislators. I wrote the letters on Independence Day and true to my form, opted to merely send a word of encouragement rather than a particular request or satisfy some agenda.

Of course at the time, I thought it would be pretty cool if I heard back from one of them. I thought I might even have a better chance since the letter was handwritten, but I did not set any expectations.

I am pleased to say that Representative Kathie Conway from District 104 HANDWROTE the following to me:

It was so nice to receive your note! Citizens that are involved are the Best!

Might I recommend a series of books that I'm reading for the 2nd time? America's Forgotten History by Mark Ledbetter. They are available as an e-book at Amazon. I think you'll find them an absolute must-read for anyone interested in Presidents, politics and American History.

Again—thanks so much for writing!

Dear Readers! This letter is like Christmas Day for me! I took a photo of it and texted it to friends. “Look what came in the mail!” I was ecstatic and am still giddy this morning.

Before the summer I lost my job, I'd become overwhelmed by and unconvinced that one person or one letter could make a difference. Since then, those feelings have been shattered. I am so grateful that I came to take this gift seriously. I now know the power that a few lovingly written words has to inspire and encourage. And so I keep buying stamps and I keep sending out letters.

Your mailbox kinda lonely lately? Send an e-mail to juliemarg75@gmail.com and I'll get a note to you.
Posted by Julie Steele at 4:36 AM