33. Attend a School Board Meeting 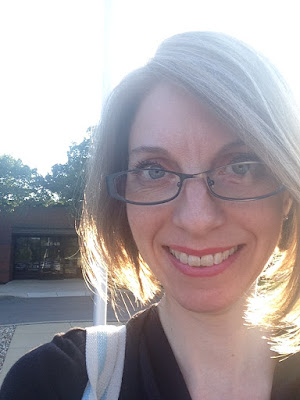 As I put the 4040 list together, I was intentional about adding activities that would balance having fun with challenging myself physically and mentally. I also added items that would require that I take my role as citizen more seriously. This is a by-product of my other project--reading the presidential biographies in consecutive order. That's why writing letters to legislators and attending a school board meeting were included. Plus, with the exception of the cost of four stamps, which I always have on hand, these activities were free.

I needed someplace for Cadence to stay when I was at the meeting, so her Sunday School teacher agreed to keep her for me. They would do the lesson that Cadence missed on Sunday together and I would pick her up after the meeting.

I noted as I drove to the administration building that I was nervous. I don't like walking into rooms full of strangers alone. I also noted that this nervousness did not register as high as standing on the platform right before I flung myself onto the zipline. I could handle this.

I entered the room and observed the pre-meeting buzz and activity. I was pleased to see a few students. Their presence surprised me. I could hear conversations. There were differing opinions about topics I knew nothing about and all sides held their lines firm. The room continued to fill with patrons and their high school students. I was impressed with the attendance.

The meeting began promptly at 7 o'clock. The entire assembly stood to say the pledge of allegiance. The words didn't come readily to my mouth as they had decades ago when I was saying it daily in school.

Patron comments came first. This is an opportunity for the public to voice their opinions and concerns to the board. Each individual has three minutes. The timer sounded before each of them finished. The gist was “Teachers earn every penny they earn. Don't cut salaries or positions,” “There should have been better communication to the public when the tax increase went to the ballot,” “I am disappointed to realize the Board doesn't have contingency plans in place now that the measure was defeated.”

It didn't take long as my back and hips began aching from the uncomfortable, squeaky chair I was sitting in to realize that I didn't know enough about the school district and that I needed to attend more of these meetings.

It also didn't take long for me to remember how little I like bureaucracy, and how I would never find myself wanting to serve on a board like this.

We heard about preliminary MAP testing results and where our district ranked. We're still top ranked in our county and also still working to rank as high as two other districts in the region. The performance at the elementary level is solid. There is work to be done at the middle school level.

Then the drudgery began. We sat through a long explanation about how the plan was to cut transportation. We heard historical perspective on a public vote in 1979 and how that affects our actions and decisions today. This part of the presentation was long-winded, confusing, and stumped even the members of the board.

I kept looking at the time on my phone. We were an hour in, surely it would be wrapping up shortly.

I observed that one woman in particular was vocal. Her professional background seemed to grant her the greatest appreciation for all of the information that was being presented and she repeatedly put things in terms and contexts that the public could better digest, at least this member of the public. 8:30 rolled around. The conversation continued. I fidgeted as much as my third-grader might in her classroom. When was this going to wrap up?

Finally, I decided that 9:00 would be my cut-off. I missed my daughter. She had homework that needed to be done and I'd forgotten to send it with her. I didn't want to take advantage of my friend's gracious help to spend her evening with Cadence. Another woman took the floor and began to further digest the evening's topic. She talked about taking pictures of bulletin boards that displayed “growth mindset” principles in an eighth grade hallway in our district. She suggested that the Board adopted that same mentality. She said that she felt the Board was giving up too quickly after a defeated vote. That instead of finding places to cut, they should go back to the drawing board and find a ballot measure that the public could get behind. Finally some pragmatism and sense.

Where was this speech earlier in the evening? Why is it that the moms on the Board as with every facet of life always seem to “get it” before the dads? I questioned throughout the evening the qualifications and backgrounds of the people who run for the board. The two most vocal members seemed to have education in their professional backgrounds (and were women). The others didn't seem to have a clue.

I know some teachers and parents on Facebook want me to report back. I am respectfully submitting this blog post as my report. While I'm curious about how long the meeting lasted, I feel no discomfort about leaving the meeting before it adjourned. At forty, my sense of priorities and balance are more fine-tuned than ever. I gave up an evening with my daughter to become a more informed citizen and parent in our district. At forty, I'm also guided by boundaries in a way I've never been before. Two hours of my time after long commutes to and from work, a long day at the office, dinner for my daughter via drive through—two hours was enough for one evening. Particularly when very little was accomplished.

I am certain I will be a more frequent attendee of these meetings. After hearing the rambling three minutes speeches of my neighbors, I might even decide to write my own three-minute speech some evening. I'm certain I could get a lot more stated in the limited time than what I heard last night. 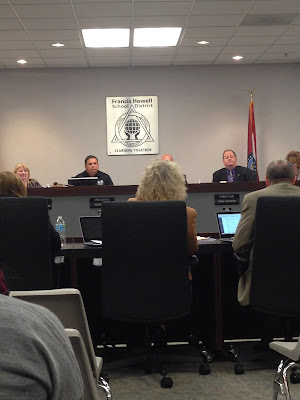