The Three Musketeers headed to London by train at 9:55 a.m. We arrived at Victoria Station, made a pit stop at the W.C. (I forgot we have to pay 50 p to use public toilets) and headed off for Buckingham Palace and Trafalgar Square's Lions. We approached the Palace from the side, which was a new vantage point. We took some photos at the Palace's front gate, answered Cadence's initial questions and then walked back to the Queen's shop. 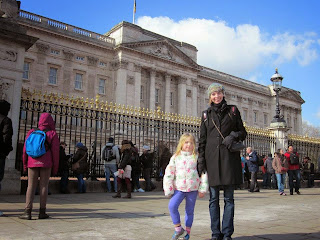 We found lots of neat souvenirs to choose from. I decided on two books (children's) and postcards. Cadence selected a chocolate bar wrapped in a British flag and postcards too. The chocolate she bought to share with Titi when we get home. 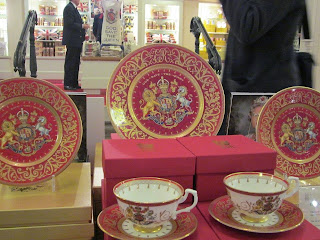 We walked back to the front of the Palace then took photos at the Statue of Queen Victoria. I realized it was my first time being on it in all my visits. The Mall was open to traffic, so we walked through St. James Park. There were daffodils in bloom, but not in the quantity as in 2005 (my second trip to London.)

S walked us to Trafalgar Square and helped us form our route and plan for the next few hours while he had a meeting with a prospective employer.

We ate sandwiches with fruit cup and honey at Pret a Manger. It was nice to get out of the cold for a little bit. We then walked to Trafalgar Square to take pictures at the Lion. Somewhere Cadence learned about the Lion and asked specifically to see it. 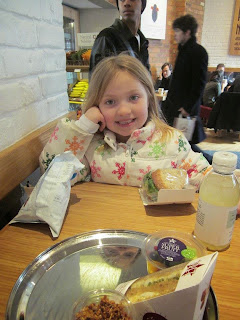 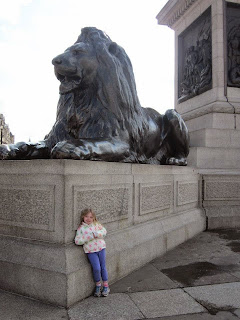 After three visits to London, Trafalgar Square, the Mall, St. James Park, and Embankment is still my favorite area. 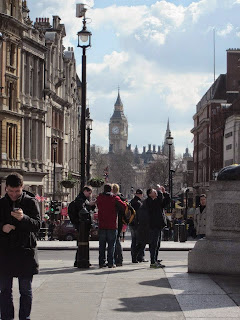 We walked to the park at Embankment and across the footbridge over the Thames to the London Eye. 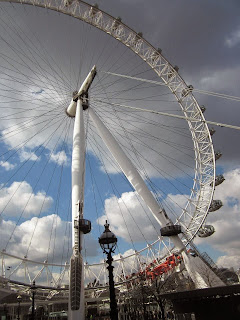 We made our way through crowds and street performers and past a new park made in honor of the Queen's Jubilee.

We bought tickets, waited in line and got on the Eye much sooner than I expected. I enjoyed the experience a lot. It really is a great way to see the city and the 360-degree map makes a great souvenir. I was glad it was a 30 minute ride; Cadence got a little warm and bored, but overall, I think she liked it too. 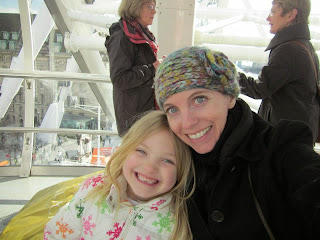 After our ride, we purchased a few souvenirs at the shop. As we were walking down the ramp, one of the employees playfully stuck out his tongue at Cadence. I smiled and he smiled too.

We had a few minutes to spare before meeting S, so I took Cadence to a playground within the Jubilee Park. Cadence had a chance to play, run, and crawl on ropes and wooden structures. I didn't wear a watch on the trip and can't use my phone, so I realized it might be tricky to meet S on time. As we crossed the bridge, I spotted a building with a clock. Problem solved! When we were on the Eye, I could also read the time on Big Ben, so I was set.

Later I read in the This is London book I bought that the hands on Big Ben are 14 feet long! Whoa.

We had no trouble finding S even though the area was super croweded. I was grateful. We decided to cross the river at Westminster Abbey, see Big Ben up close and head for home early.

The key to this trip has been stopping while we're ahead - something Raising Your Spirited Child taught me and was reinforced over and over on this trip.

The other theme of this trip has been our excellent timing: Going to Leeds Castle when we did ahead of the snow; Staying in out of the snow the next morning; our timing of seeing London - It was sunny and clear all day.

We walked back to Victoria Station and there wa a train back to Maidstone within minutes. We were stuck in traffic in Maidstone picking up E from nursery. I had Adele's Skyfall stuck in my head, so S played it in the car.

M taught me step-by-step how to make breaded chicken for Cadence. She couldn't stop eating it.

Our evening was quiet. We ate leftovers in preparation for our weekend trip to Belgium. Cadence and I went to bed early. London wore us out!

Julie's campaign: Make the Brits smile.
Posted by Julie Steele at 6:00 AM

Email ThisBlogThis!Share to TwitterShare to FacebookShare to Pinterest
Labels: Travel