On Martin Luther King Jr. Day, my office was closed and Cadence, L, and T (our teen friends we were staying with) were out of school. I'd already completed my first 5k training run, done my daily sun salutations, read some more of Andrew Jackson's biography (which gets me closer to 2015's prez reading), and crossed of my bread pudding from the list. It seemed the day off was an excellent time to knock off another item.

Cadence was the only one of the quartet who had been to Meramec Caverns. On our drive down Hwy. 44, she repeatedly recounted the bumpy ride to the caverns that took place on the school bus during her summer camp trip. Everyone, including the teachers, were miserable on this bumpy, bumpy ride. Did I mention it was uncomfortable and bumpy? She also warned me that I needed to wear appropriate shoes because the caves were “buttery.” She meant slippery, but I like the butter reference best.

We had about 20 minutes to wait for the next tour, so the four of us scoped out the gift shop. I was thrilled to discover that they had travel pins (which I collect) so already this trip was off to a good start.

I really didn't have any expectations. I hadn't seen any photos of the caverns until I was looking at the postcards in advance of our tour. The photos do not do the vast open spaces justice.

The tour lasted just over an hour and we walked a mile and a quarter. 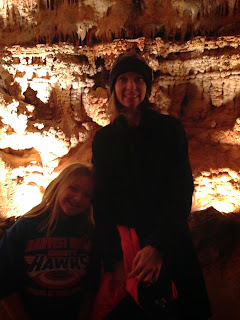 I was impressed with the tour guide's information and presentation. Here are a few fun facts:

Missouri is known as the Cave State, home to more than 6,000 surveyed caves.
The cave system was introduced to the public as a tourist attraction in 1933 by Lester B. Dill, who invented the bumper sticker as a means of promoting the caves.
During the Civil War the Confederates owned the caves, but Union soldiers used the space. When the Confederates learned this, they hired 13-year-old Jesse James to kill the Union soldiers.
It takes 75 years for stalagtites and stalagmites to grow one cubic inch.
Mnemonic device for which is stalagtite and stalagmite: 'tites hang tightly from the top; 'mites hurt mighty bad if you sit on one.

Having a 13 year-old-boy made history come alive for all of us as we discussed Jesse James and his young age when he carried out the Confederates' job of killing Union soldiers. We couldn't wrap our minds around his youth as well as how in the world he and his gang navigated the enormous spaces in the pitch blackness. 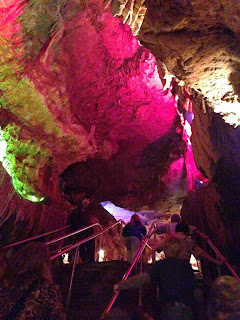 It was an even better excursion than I could have imagined and am so glad I put it on the list. 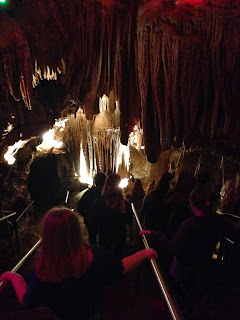