I added baking bread pudding to my 40/40 list because it's a recipe I remember my paternal grandmother making when I was a child. She left out the raisins from the recipe because she knew I abhorred the nasty dried fruit. I've meant to make it over the years, but never have. Whatever is put on the list is guaranteed to be achieved, and thus the bread pudding was added early on.

I found a “fancy” raspberry bread pudding recipe online. I chose this past weekend to bake it because I was teen/dog/house sitting for some dear friends and their fifteen-year-old daughter, T, is an exceptional baker in her own right. I thought it would be a fun activity to do together, and I also knew she'd know what to do if I needed help. Cadence helpfully added, “T's a better cooker than you, isn't she, mama?” Um, yes, this is a fact. T IS a better cooker.

The plan was that I would leave my yoga class, and dash into Aldi's on the way back to my temporary home for the weekend. The dash quickly turned into this ridiculous scenario. I didn't have a quarter for Aldi's shopping cart. I thought that there'd be no problem. Just a handful of ingredients and I'd be on my way...

I reached the dairy coolers and got stumped. Is Heavy Whipping Cream the same as the Heavy Cream my recipe called for? I texted Nicole. Then I asked a lovely shopper with a southern drawl. She was perplexed like me, but thought yes, it is the same. I texted my mom who confirmed she thought they were the same.

The next text to my mother was to make the “how many pints are in a quart?” conversion. While I awaited her response I queried another set of shoppers. It took four of us plus one long-distance mom to determine that OMG this recipe was going to give us a heart attack or instant high cholesterol. I needed SIX PINTS of heavy whipping cream! Now my arms are holding two loaves of Italian Bread, a container of apple juice, and there is no lady-like way that my arms can carry these six cartons! People are waiting for me to sort this out, and finally one of the conversion helpers runs to my aid. We grab a box in the cooler since I need so many cartons and she helps me load it all in so that the chaos can stop, and so the rest of Aldi's shoppers can resume their previously scheduled shopping.

The next few minutes are spent with me walking around and around the store looking for another freezer that must be hiding the frozen raspberries. When I find no additional cooler, I return to the berry section and read the signs slowly. Mixed berries AND raspberries should be found here. I set down the box of imbalanced groceries on the floor, get down on my hands and knees and rummage through the fruit boxes. With some scrounging, I find two bags of raspberries. Whew!

The first lady who helped me with the heavy cream vs. heavy whipping cream question passes me whilst I'm still on the floor raspberry picking and asks if she can help me. I was struggling with yoga-weakened legs to get up off the floor in a jean skirt and pick up this crazy box of ingredients. I smiled and said no thank you.

I make it to the check out, swipe my debit card, and that damn thing gets declined. Like after each of four attempts. The kind young checker says she'll suspend my sale while I run to the ATM. This whole time I'm thinking, “This would make for hilarious television, following me around like a fool.” I also remember what my yoga teacher had told us just minutes before: Yin yoga teaches us how to not lose our cool when we find ourselves in difficult circumstances. Thank goodness for that nugget in today's class because I am calm, laughing at the situation, and staying composed.

I drive to the ATM in the shopping complex only to realize that my debit card was declined BECAUSE I DIDN'T GIVE HER MY DEBIT CARD. I handed her a different card, but didn't think to check it whilst I was at the register. I withdrew money anyway and returned to the store. I stood in line chatting with one of the friendly helpers of the great pint inquiry and then paid for my ingredients. Twenty-three dollars later, I was ready to make this pudding.

Cadence and T and I could not get over how much cream and sugar were required. T and Cadence read the recipe aloud to me and we leisurely made our way through the process. There was great discussion about how much bread to actually add to the creamy mixture. We decided to stick with the recipe. I chose Italian Bread because I thought it would be more absorbent than other kinds given that I didn't have time to “age” the bread. 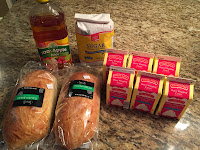 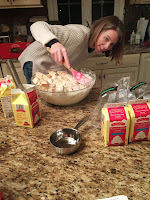 While we were waiting the thirty minutes for the bread to soak up the ocean of cream, we played UNO.
The recipe was easy to follow and didn't take long. I spooned in the cream-absorbed bread and added the raspberry and sugar layer the spooned the remaining bread over the raspberries. There was A LOT of cream remaining. After some pro-ing and con-ing, T and I decided we'd pour some of the cream over the layers in the 9 x 13 pan. 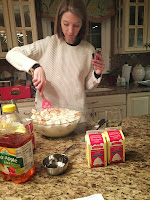 While the yummy recipe baked in the oven, we prepared the completely unnecessary vanilla sauce. The recipe called for three sticks of butter, flour, and vanilla and asked me to heat the butter and flour together until we achieved a “nutty aroma.” Readers, THIS is one of the many reasons I have not previously been comfortable in the kitchen. I do not have a reliable sense of smell. What the heck is a nutty aroma and how will I know when I've achieved it? Thank goodness, T was with us.

We happily pulled the pudding out of the oven. My favorite quote of the night is when T said, “We're gonna be eatin' on this for days!” The pan WAS so full of this sweet berry concoction. T and Cadence had never had bread pudding and were pleasantly surprised by the final product. 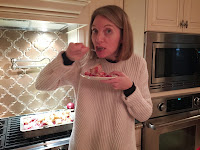 I'm especially glad to have chosen a fancier version of the old stand by, and am certain that I can recreate the recipe with less cream and sugar and net the same delicious results.

#2 on the list is complete and our taste buds absolutely approve! 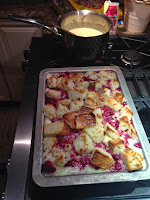