I continue to be grateful for stumbling on the American Presidents Series. They are well-written, interesting, and concentrate on brevity. This series may be the only way I get through this Presidential reading project before I turn fifty. Just nine years and 9 months to go. Whoa.

The John Tyler biography was written by Gary May.

President Harry Truman's family long believed that they were related to President John Tyler. He was relieved to later learn that it was another John Tyler and not the President that they were related to. Truman said this of President Tyler: "No one can charge John Tyler with a lack of courage. He resigned from the Senate because he did not agree with Andrew Jackson, but I can never forgive him for leaving his party to join the Whigs, or for leaving the Union in 1861." He also thought that Tyler "didn't amount to a great deal."

1. First Vice President to assume the presidency upon the death of a president. Vice Presidents before Tyler had been considered not particularly important and would often stay home and conduct their own business away from Washington.

2. First President to become widowed during office. His beloved wife, Letitia, died within his first year of office.

4. First time impeachment was suggested. Rascally Henry Clay was behind these motivations.

John Quincy Adams had no use for John Tyler. Tyler's biographer included journal entries from John Quincy Adams's vast collection of journals. It turns out he was kind of cranky and whiny. Who isn't when he or she is writing in their own journal? But it was interesting to read Quincy Adams's views. He certainly had a unique vantage point having served as president.

"But Tyler, within hours of his arrival in Washington, showed the Whig cabinet he was stronger than they had expected."

I was impressed with the speech Tyler gave to Harrison's, and now his, cabinet: "I am very glad to have in my cabinet such able statesmen as you have proved yourselves to be. And I shall avail myself of your counsel and advice. But I can never consent to being dictated to. I am the President and I shall be responsible for my administration."

"Tyler must have been pleased with his first day as president. He established a precedent that would affect the future of the presidency long after he left office and he had managed to keep Harrison's government intact, which provided stability at a critical time."

John Tyler was the last Virginia president and had personal encounters with the Virginia Dynasty men. He looked up to these men. He was also a slave owner, and not a lukewarm one, like Washington (who understood that the practice was not right and not sustainable). He was southern through and through and believed in the institution as part of the fabric of the South.

DO NOT LOVE THAT!

I should be saying something about his role in the annexation of Texas. It was very important to him, but I got lost in the details. I hope that reading James Polk's biography will help me see it from a different perspective and have a better handle on it.

"Tyler found himself on the wrong side of history, left the Union, died a traitor, his good deeds forever tainted by his final years."

"For good and ill, Tyler preserved and defended the office from those who wished to fundamentally change it. By boldly assuming the full powers and prerogatives of the presidency upon Harrison's death, he established what came to be known as the Tyler "Precedent," not only ensuring the orderly transfer of power in his time but by making the office "independent of death," guaranteeing that future accidental presidents could govern with authority. 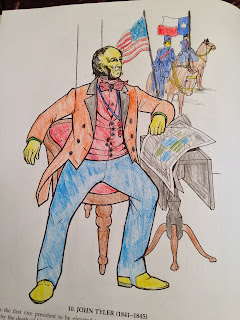 P.S. According to this article, John Tyler still has living GRANDSONS. Tyler fathered children with his younger wife into his seventies and then one of his sons had children late in life as well. That is mind boggling!