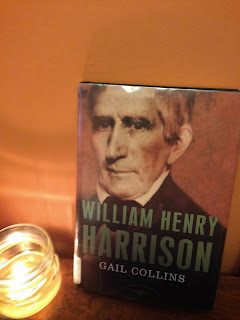 Poor William Henry Harrison. I'm not really a fan. His biography by Gail Collins notes in multiple references that he was very well liked by his contemporaries, which makes me feel worse about not really enjoying his story.

Here are some facts:

He was born in Virginia to one of the signers of the Declaration of Independence.

He and his wife had A LOT of children (ten) who with the exception of one lived to adulthood. (This is quite remarkable for that time period.)

He was a general in the military.

He caught pneumonia after his long-winded inauguration address and died 31 days into his presidency.

His grandson, Benjamin Harrison, would also one day become President.

Here's why his story got tiresome for me: He had a lot of mouths to feed, so he was in debt a lot. He would seek a better-paying government job to keep his family fed and to get himself out of debt. This was a cycle that repeated over and over again.

I was amused to read what President John Quincy Adams wrote about Mr. Harrison. “This person's thirst for lucrative office is absolutely rabid.” “The president judged the applicant 'a political adventurer' with a lively and active, but shallow mind.”

“Politically, Harrison's greatest achievement was to star in what is still celebrated as one of the most ridiculous presidential campaigns in history.” Harrison was the first candidate to campaign. Before that, candidates campaigning on their own behalf had been considered bad form.

“The story of how the Democrats sneered at Harrison as a pensioned-off nobody and how the Whigs, in response, created the Log Cabin Candidate is one of the most famous sagas in the history of ridiculous presidential campaigns...They quickly turned the log cabin and hard cider into a metaphor for Harrison's sturdy frontier virtues.”

This biography was also more difficult to read because by this point in the presidential time line the civil unrest and tensions that eventually caused the Civil War were coming into sharper focus. The issues of slavery and Indian mistreatment were discussed in more vivid detail than previous biographies, and I had a difficult time reading about these parts of life and politics in the United States. “And when it came to slavery he had been fairly consistent throughout his public life—decrying the institution while insisting that the slave owners had the right to continue the regrettable practice.”

I softened a bit when I read these sentences: “Championing America's veterans had always been, and would always be, his passion.” and “While Harrison became controversial in his various political activities, he was always personally popular in any society in which he traveled.”

The poor fellow's financial worries were made heavier by the poor choices of his adult children for whom he had to help on a nearly constant basis. When crushing debt or death overcame one of his children, he then had their children to take care of. Ugh.

I was grateful that this biography was short. I was ready to move on to President John Tyler. Spoiler Alert: Tyler is a far more interesting character. I'll be more enthusiastic about recapping his biography.
Posted by Julie Steele at 4:58 AM