For the Love of my Nephew

My sweet nephew and I have bonded over his love of zoo animals, Star Wars, Mizzou Football, and his very nuanced understandings of each category. None of these things are of particular interest to me, but they are of utmost importance to him and he's found an avid listener in Aunt Julie. Last summer as we ate hamburgers and french fries in a restaurant he asked me, “Did you see the game when Mizzou crushed the...” I can't complete the sentence because as he began talking about football my brain froze. I laughed to myself and thought, “In ten years, this child will realize how futile it is to be having these conversations with this woman.” I did my best to ask relevant questions and keep the conversation going. His excitement for all things Mizzou football is contagious.

His parents bought tickets for a Labor Day Weekend Mizzou home game and invited Aunt Julie and Cousin Cadence to come along. A college friend who lives in Columbia dropped the six of us off at the stadium. We watched Luke's eyes and smile widen as he took in the entire scene—the sea of humanity dressed in gold and black, Tigers logos everywhere, a stadium full of fans. It really was a wonder to take in.

We presented our tickets at the gate and grabbed Mizzou paper fans, which were a God-send on such a warm, sunny afternoon. We bought water bottles and made our way to our seats behind the end zone. We sat down and I must admit, I was overwhelmed. The sheer number of people wearing the same color, the band playing. It was something else, all right. I thought of all of my friends whose weekends through autumn are overtaken by college football. I felt a pang of jealousy. I wanted to belong to this club.

I thought back to my best friend's dad trying to explain the game to me as a freshman in high school before I moved away. I thought of being the girlfriend, sister, and friend of band members at my new high school and how each Friday night the game went completely over my head.

Later I married a man who'd played football in high school and college. I made some progress in following the game, but not enough for either of our satisfaction. Finally, I just gave up.

Yesterday I decided to approach watching football the same way I have approached so many things in my fortieth year. I was tired of being the one who “didn't get the game.” Training for a 5k, baking pie crusts, and helping my daughter with her third grade math have all confounded me. But with practice and a new attitude, none of these things have beat me.

My sister and I admittedly used the time to catch up with each other while our children were consumed by the game, but in between those spurts of conversation, I watched the field. I still struggled figuring out who was holding the damn ball, but I was undeterred. I watched the scoreboard and kept track of the game's progress. Mizzou scored several touchdowns and a few of them brought me to my feet cheering on the Tigers.

I experienced a few moments that were like my language immersion in Quebec. The longer I studied French and practiced speaking it the easier my fluency came to me. I remember the time I told my teacher that I had so much to say, but didn't know how to express it. She encouraged me to start speaking and she'd help fill in the blanks. That very thing happened as I sat in the bleachers. I just watched the game at the level I knew and then asked questions for clarification. Suddenly, I was watching the game and enjoying it!

I let go of the need to understand every single intricacy of the game and just enjoyed applying what I did know. Who knew that watching football could reinforce these life lessons I am trying so hard to master: Letting Go of Outcomes and Letting Go of Old Stories I've Long Told Myself.

Mizzou won the game 34-3, and there was a little boy from Michigan cheering on his favorite team. He squealed with delight.

I can't believe it. I am nowhere near being part of the club of football-loving fans, but I also am no longer feeling completely clueless. I'm am actually looking forward to watching football again. Especially with my nephew. 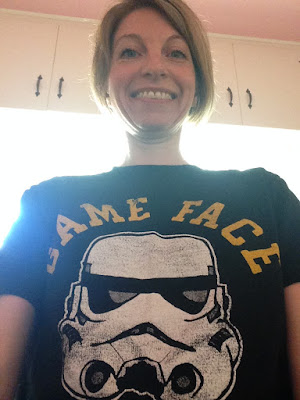 Luke met me at breakfast in the hotel on Game Day. He said, "Since you don't have a Mizzou shirt, you can wear one of mine." I LOVE that the shirt he loaned me combined his love of Mizzou and Star Wars. I wore it proudly!
Posted by Julie Steele at 2:57 PM