I find myself living in a "Murphy's Law" season of life post divorce. I am least in the position to afford the repair costs of anything, and so of course, these past two years have played host to a ridiculous number of things breaking or needing repair. What I am learning is how lucky we were before that things remained in good repair. My chagrin is that now it is mine alone to shoulder the unexpected costs and inconveniences.

Last Sunday evening I began entertaining the idea that I might be superstitious.  I actually considered the possibility that the mirror that shattered after I'd fallen asleep one evening last year might have something to do with why the spin cycle on my washing machine stopped doing its job. 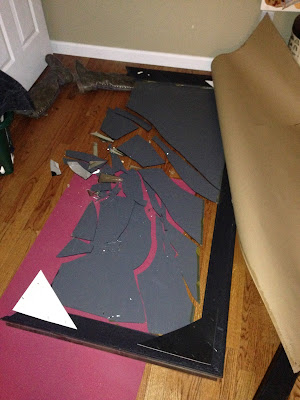 But rationality returned and I remembered that the spin cycle had been on the fritz for months. I was grateful that I'd been able to eek out complete laundry cycles as long as I did.

I am fine-tuning my ability to remain calm and not think the world is ending with each of these episodes. By the time I figured out there was a problem it was too late to do anything about it. I kept talking to myself about how it's only money and the loop of bad luck I find myself in will not last forever.

One of the advantages of these annoying moments is that they nurture my creativity and problem solving skills. I went to work the next morning and had the brainstorm that maybe someone I know knew of a spare washing machine that I could make use of, so I posted such a request on Facebook. Several people commiserated with me on the frustration of a broken washing machine. Others shared my message. Another friend messaged me and encouraged me to google the problem in the event that it was a simple fix.

I spent an hour watching youtube videos about the possible scenarios. I would watch the video, put it on pause, run for the tools the repairman on screen said I needed, and then followed his lead. Each time I hit a dead end, but I definitely felt better educated about the workings of the machine. After an hour, I decided to schedule an appointment for a repairman. The broken spin cycle seemed relatively simple by all the videos I watched, but I knew that I was out of my league.

One of the possible culprits was a broken lid switch, and lo and behold, that was my machine's problem. I felt so proud to recognize the diagnosis when the repairman announced it the next morning. We discussed my options. I decided to pay for the repair. The repair was expensive, but less than a brand new machine.

What this season is teaching me is that there is not one static right decision, but the right decision for the time I'm in. In this particular moment, having the part available was a convenience I was willing to pay for. My machine would be functional again immediately. I wouldn't have to go shopping and pay for a brand new machine. I could keep the old machine with higher water levels than the new high efficiency machines. I would keep this machine out of the landfill a little longer. All of those factors made me confident in my decision.

This season is also teaching me to trust my ability to make these decisions on my own with confidence. The greatest tool I access in this new solo chapter is my gut. I listen to her consistently and she delivers peaceful, firm direction regularly. I almost never second guess myself now, which feels like such a long-awaited gift after years of not feeling sure of my decision-making. I'd like to think that I could learn how to fine tune my decision making without all the inconvenience and expense, but I have a strong suspicion that's not how it works.