Yesterday Cadence ran in the Read, Right, and Run race. Throughout the school year, students read, do "right" things (such as collect donations for non-profit organizations and read to seniors) and run. On this special day, they run the final mile of the marathon they've been running. More than ten thousand area children accompanied by parents, family, and friends converged on Forest Park. Cadence was cheered on my her mom, dad, Aunt, and two cousins from out of town.

We found empty sidewalk space within view of the Muny and its gazebo. The sun was shining with a brightness St. Louisans haven't seen in days. Its rays and my cup of coffee helped to warm me.

As we sat on the curb watching other people's children run their race, I began reflecting on my first race in Indianapolis nearly two years ago. Having never raced before, I was struck by how good it felt to hear strangers yell out encouragement to us as we ran. It gave such a boost and helped propel my achy legs forward.

I said out loud that I wanted to cheer on these kids, but was feeling shy. Something about naming my hesitation blew it away and I began clapping and yelling a variety of "you can do it" messages. Many times I was the only voice in the crowd yelling and clapping. As I watched these children take in my encouragement, I noticed that a lot of times they didn't know I was talking to them. I wanted them to know it, and because I didn't know their names, I began shouting out their bib numbers. 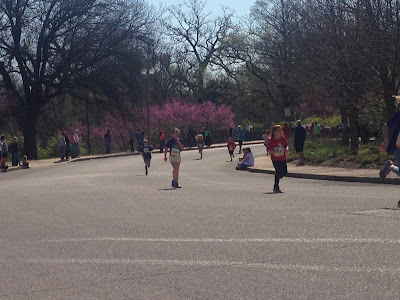 Sometimes the child would smile and keep going, sometimes even faster than before. Most of the time they'd look at me like I was crazy.

It wouldn't be the first time I've seen that look.

My sister and Cadence's dad laughed at how nearly every time I shouted a bib number, each child had an identical response. One suggested that I'd probably get a child tripped up as they looked for their bib number.

I persisted. The more encouragement I yelled the more I remembered what Glennon Doyle Melton repeats: There is no such thing as other people's children. They belong to all of us. It was a privilege to stand in for their parents on this stretch of the race. I know I wanted Cadence to hear the cheers and clapping of other spectators on other parts of the race.

Then I began thinking about the families in Syria. How their children are ours too. I felt a pang of guilt sitting on this curb in the sunshine with not a care in the world (for the moment.) And then I caught myself. I remembered that my guilt does nothing to improve their situation. I thought how much those families would delight in a Saturday morning race for their children and decided the best way to honor them and their struggle in the moment was to enjoy it and be grateful for it. There are other things I am doing to help the cause such as praying for an end to such suffering and for the safety of those helping on the ground, as well as donating to worthy causes that are helping to support relief efforts.

It isn't uncommon that my lighthearted, happy thoughts turn to such heavy, important topics. Welcome to a jaunt through my head and heart. I consider these roller coaster thoughts as reminders of life's interconnectedness. Life is beautiful, satisfying, messy, and catastrophic at once.

No children tripped as a result of my cheering. And the cheering got really loud when we finally saw our star.