A few months ago a friend and I managed to get tickets for Taylor Swift's second show in STL for our daughters. Given the small fortune it took to make this amazing experience a reality, I decided that I would practice my word of the year GENTLE and overlook the fact that the TS concert was at a different venue, and allow it to count for my 4040 checklist.

And then a few days before Zac Brown Band was coming to the venue stipulated on my list, I scored two free tickets. I invited my friend, N, and she was able to join me.

Zac Brown Band was fantastic. They played such a great mix of new and familiar tunes. We sang along and swayed to the music. I commented that Zac Brown really has a voice for the Broadway stage. He's theatrical and engaging. And his band of brothers are entertaining as well.

My friend and I were in mellow moods and the crowd was not so big, so remaining seated most of the time did not hurt our view of the stage. We sat on the grass wrapped in blankets on a cool May evening, enjoyed world-class music, and took in the sights of other concert goers who seemed impervious to the cool temperature based on their choice of wardrobe. This was a moment when I realized that 40 really is old in some respects. 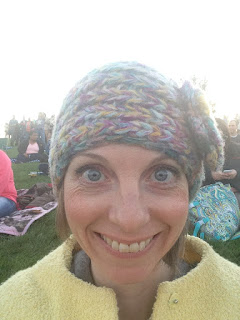 Yes, I actually wore this to a concert in May. That's what 40 does. It knows oneself and one's personal temperature gauge and says, "Wear the hand band. If you are cold, which likely you will be once the sun sets, you won't enjoy yourself." I was slightly self-conscious standing in line in the ladies room, but then a woman commented on the head band and noted that I looked warm and she was cold. Practicality DOES win out after all! 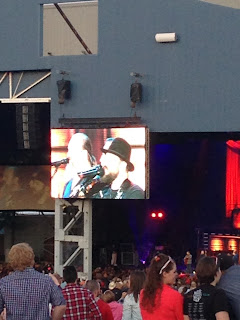 More than the set list of the evening and the way that Zac's musicianship makes my heart flutter, I will remember that I got to share really great music with a really great friend.
Posted by Julie Steele at 7:31 PM