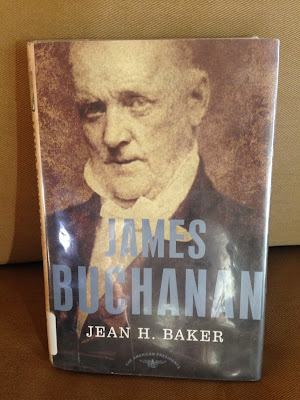 I had two main questions as I read about President James Buchanan, the fifteenth and only bachelor president. One was rhetorical: How in the world could citizens justify slavery? I didn't expect to be able to answer that one.

The other question focused on why the US had such a run of Northern-born presidents who sided with the South in the years preceding the Civil War?

Then on page 137 of Jean Baker's biography I actually got an answer for Buchanan's prosouthern tendencies.

The question remains why Buchanan, a Pennsylvanian educated in a free state whose wealth came from the practices of capitalism, not plantations, was so pro-southern. The answer goes beyond the political support the South extended to him in 1856. Rather it rests in his social and cultural identification with what he perceived as the southern values of leisure, the gentleman's code of honor, and what George Cary Eggleston, a Virginia writer, once called "a soft dreamy deliciously quiet life...with all its sharp corners removed." Throughout his life, James Buchanan enjoyed the company of southerners. Their grace and courtesy, even their conversational talents, attracted him. With slavery unimportant--indeed Buchanan became convinced that slavery helped "civilize" blacks--he sought out the company of these white aristocrats and soon absorbed their ideals. He believed  southern legislators were often statesmen, protecting that icon of his faith the US Constitution."

It is serendipitous that I have read this group of presidential biographies in the midst of this year's presidential campaign season. Reading about these terrifically terrible presidents offers some perspective. Becoming more familiar with this time period underscores what I've been saying all along: In human history in general and in US history in particular, the good ol' days is a mythic time period.

The days we're encountering now are not the worse in our nation, but the worst we who are living now can remember. However, it also is a solid reminder that when we do not study the lessons and mistakes of the past, we are destined to repeat them.

James Buchanan was one of the most qualified men for the job of president. He had a terrific governmental resume. He and John Quincy Adams shared this in common. They also shared legacies of leading poorly and not excelling as commanders-in-chief.

Jean Baker best sums up Buchanan on page 141: "He was that most dangerous of chief executives, a stubborn mistaken ideologue whose principles held no room for compromise. His experience in government had only rendered him too self-confident to consider other views. In his betrayal of the national trust, Buchanan came closer to committing treason than any other president in American history."