Time Travel and Hope for the Future

Somewhere between my sophomore and junior years I began collecting items to place in a time capsule. I had made one in third grade as a Brownie and remembered how fun it was to think about opening it when I was in eighth grade. You know, when I was “really grown up.”

Besides that elementary brush with the future, the idea of a time capsule came out of thin air. I was heartbroken and couldn't see how my future was going to take shape. For a year, I collected movie stubs, photographs, news clippings of current events, catalog pages of styles that caught my eye. I wanted to document who I was at the time, and project forward who I might be in the future.

I collected items for a year and then sealed the box and labeled it: To be opened when I am 35. Just like that third grader years before, I really couldn't imagine yet what my life would look like at 35.

I'm beginning to understand that my 4040 list is another version of that time capsule. It is a declaration of hope. The list has been my way of reminding myself that while I can't see what the future holds, what this new decade has in store for me, I have hope that good things are to come. It is the choice to take an active rather than passive role in my own life.

I've always intended to write about the time capsule. What I collected and what the significance of the items were. In the five years since I opened it, I haven't felt ready or up to it, but now I do. I won't write about EVERY object in the collection. That would get long and boring, but I do think there is some great stuff to share.

The best way to kick off this series is with the letter I wrote to myself:

It is now 15 years since I sealed this time capsule. In those 15 years much I'm sure has happened, but since at the time of this letter those things haven't occurred, I want to refresh your mind of who you were at 20.

You were a young woman with enthusiasm, intelligence, warmth. You were (and hopefully still are) an attractive woman. Thin, but finally more fashionably so.

You loved life! You knew very much who you were, but was never satisfied. Growth, optimism, laughter described you. You were very much in love with a man named _________, and was patiently waiting to see how that turned out.

You were very goal-oriented, spiritual, reflective/introspective.

Travel, language (French), independence and self-sufficiency were big themes for you at that time.

Congratulations on the growth & successes you've seen since then.

I hear hope in those words, don't you? I couldn't begin to tell 20-year-old Julie what she was in for back then, and I'm really glad I couldn't. All the bumps and bruises, joys and happiness have made the future worth living into and waiting for with expectation.

Here's to some time travel! 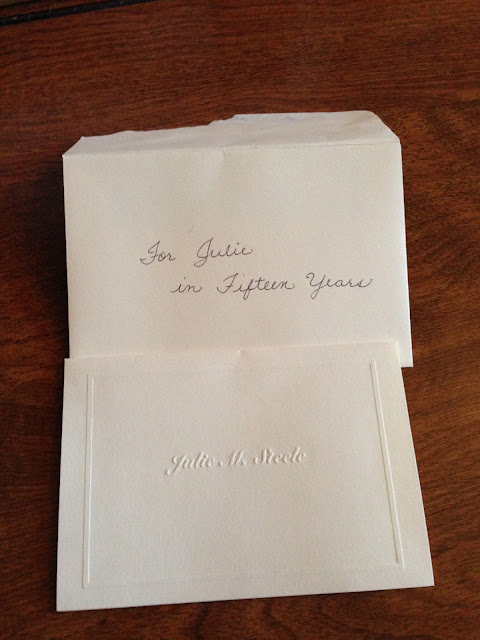