Four days after my fortieth birthday I was on the drive home from work when my car started making a "I'm no longer working properly" noise. This noise then ushered in a harrowing five minutes where I lost acceleration IN RUSH HOUR TRAFFIC, and prayed my way lane-by-lane to the shoulder only able to go 20 miles per hour. It is a miracle I didn't cause an accident or get hit by a car in the process.

Once I was safely out of traffic, I called AAA and they dispatched a tow truck. I then called a friend who was available to pick me up, and she sat with me while we waited for the tow truck. The temperature outside added to the drama of this evening's vehicular calamity. Cold doesn't even begin to describe the temperature. My car was still running, but it generated no heat.

As I sat in my car waiting for my friend and the tow truck, I thought about how handy it would be if I knew something about cars and car repair. How convenient would it be if I could raise the hood of my car and diagnose the problem? These meanderings were an attempt to keep my mind off the finger-numbing cold.

No one wishes for car problems. I certainly didn't. And I was no fan of the $750 bill that followed.

What I really wasn't prepared for, though, was that on that night on the side of the road, a major piece of my novel materialized. My musings about understanding car repair morphed into determining that my main character, Astrid, would become a mechanic after a life-changing event.

Now the daunting task has begun: Julie must learn about cars and car repair, so that Astrid can become a mechanic. It's laughable. And empowering. I keep telling myself, "If I can write a novel, I can learn about cars."

One of my Brownie mom friends has a vast knowledge about cars and is going to be a consultant. She looked over the list of maintenance work that still needs to be done to my car and pointed out the things I can do myself (with her supervision). Air filter and spark plugs for starters.

This winter the rear struts that hold up my hatchback lost their effectiveness. Any time I opened the door, I'd reach in the back and immediate feel the door fall and rest on my backside. I hit my head a few times too.

With this new interest in learning about cars and my friend's insistence that car repair isn't as tricky as most people think, I decided that I would attempt to replace these parts myself.

What the first three months of being 40 have reinforced is the importance of asking for help when you need it. Maturity dictates that not asking for help is really quite dumb. So I asked a friend at church to take a look. He walked me through how to get the parts and how easy he thought it might be to accomplish it. He also recommended that I google how to replace them for some background.

I made a trip to Autozone and ordered the parts. 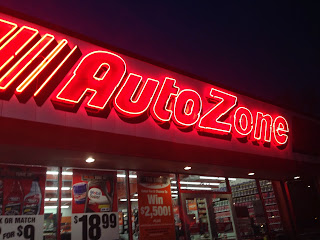 Lesson number one: Be specific when you need two of something. Do not assume you are buying two at the time of purchase.

Lesson number two: Inspiration and help in writing a novel will come at the most unexpected times.

When I returned the next day to pick up my parts, I discovered that I had ordered only one and that one was ready for pick up. Angela, the newly promoted store manager, assisted me in ordering the second one. It turns out that just as I had suspected the day before when I was ordering part number one, Angela has a story.

She grew up around cars at her grandfather's side. She didn't proceed to work on cars herself for 25 years because he believed that girls shouldn't work on them. She told me that she loves it. Her face lit up as she was telling me about it. I told her about my novel. How there's a scene that takes place in an Autozone. How I may become a familiar face needing to look around and get inspiration. She welcomed my questions.

Around this time, my long-awaited used copy of Auto Repair for Dummies by Deanna Sclar arrived. I need a handy reference, and this book seems to be written for me.

A few weeks later, I attempted to replace the struts. What you will see on my face in the photos captured by my daughter is CONSTERNATION. 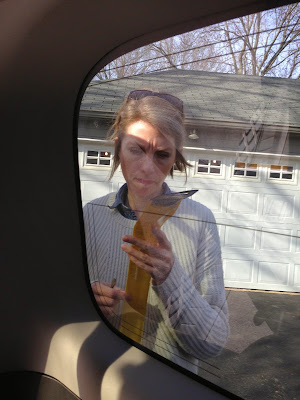 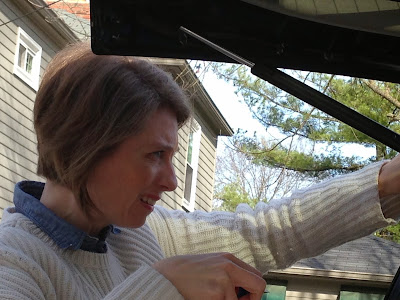 I was getting nowhere. I was getting frustrated. I found a video online that showed that replacing these struts was a two person job, and warned about the pressure in these parts and the injury that can ensue.

Enter Maturity, Patience, and Common Sense. I decided to let go of the idea of doing it myself and ask for help.

Last night my parents came into town for my daughter's birthday, and I asked my dad, an engineer, to help.

He, unlike me, was able to make sense of the instructions. I watched him. And I learned. And the parts are replaced. And the door will no longer fall on top of me anymore. 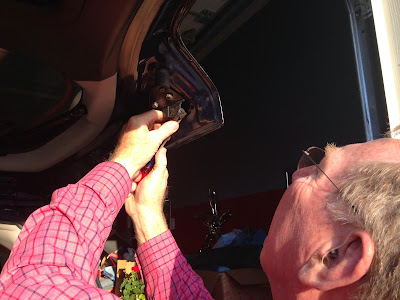 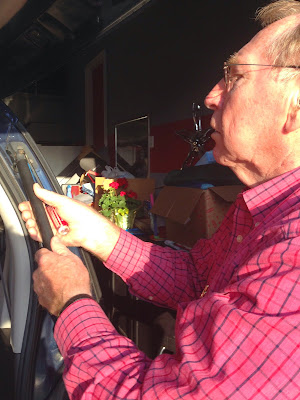 I asked my Brownie mom friend, "So how am I going to know what to write about my character working on?"

"I'd say your character drives a 2006 Nissan Pathfinder. Whatever you do to your car, she can do to hers."

After last night's demonstration of replacing rear struts, it looks like Astrid has her first assignment.