What's Bringing Me Joy These Days

As I've compiled this list of things that are currently bringing me joy, I've felt a little bit like Oprah. She finds things she loves and shares them with her readers. My items, some tangible and some not, do not have high price tags, but in my pursuit to live each day fully and not “live for the weekend,” I am finding my life deeply enriched by these few little things. Mostly, I am grateful that I have been paying close enough attention to recognize a joy pattern emerging. Without further ado and in no particular order:

Opening my home to a stranger

A few weeks ago, I received an email from a church friend who had been asked by another church acquaintance to find a point person for a woman moving to town as she embarked on her doctoral studies. I immediately replied that I'd be happy to be a point of contact and that the young woman could stay with us if need be. What happened next has filled my month with so much joy. We don't live near her university, but I work close to a metro station that she can use to get to her campus, so for the past three weeks, I have carpooled with this new friend. We've meal planned together, had wonderful conversation about life, watched season three of The Good Place, worked together to open the stubborn lid of a jar, and sprinted from our car in a rain storm for the city's best frozen custard.

This woman's appearance in our lives has given me the chance to pay forward the kindnesses of my college town parents and the hospitality of the couple who began loving me as their own in my post-college years. In short, she's become a new friend. She's brave, adventurous, thoughtful, and smart. She's a great role model for my daughter and her company has been a blessing to me. Her visit has also encouraged me to finally make progress in my meal planning, grocery shopping, and execution. I am planning ahead, eating out less, and enjoying cooking in new ways.

I have long loved English Breakfast Tea, but with our guest's arrival, I've been introduced to a new flavor. She lived in London before coming here, and found Yorkshire Gold at the British Shop in our historic shopping district. With one cup, I was hooked!


Music on Shuffle
I love listening to music, but sometimes I don't know what I'm in the mood for, so I've begun playing my music on shuffle. I like being surprised, and with the shuffle feature I am surprised every three to four minutes. It's great! And it also reminds me of all the great music I have amassed over time.

I've always been a daydreamer, but these days my daydreams feel different. They aren't filled with longing as they once might have been. These days they feel full of potential. And not because all of them will come to pass, but because I'm not attached to them. They feel like creative exploration. It was daydreaming that helped make this blog post take shape, and daydreaming that keeps my gardening exploits feeling like adventures rather than more things that have to be done. There's freedom in letting my mind wander and seeing where that takes me.

On a recent lunch time walk with a colleague, I stopped by a park that has a little library and introduced her to it. I look inside regularly, not because I'm in the market for a new book (I've got plenty lined up to read), but because I like seeing proof that people actually use it. I check out the titles and find new ones there all the time. On this particular day, I saw a random magazine. It had a beautiful cover and in large print it read, Enchanting Gardens Around the World. It was the March-April issue of Veranda magazine. Since my 2019 word is enchantment, there was no doubt I would take it with me. I tucked it under my arm and continued with my walk.

I can't tell you how many ideas I got from that one issue. I haven't executed any of the plans, but I have new food for thought and couldn't be more delighted. Besides the beautiful visuals, I was taken by these words: “Flowers always make people better, happier, and more hopeful; they are sunshine, food, and medicine to the soul.” - Luther Burbank, American Botanist and horticulturist

A feature about a couple who bought a rose farm has me curious about expanding my knowledge of roses beyond the five knock-out rose bushes I've been tending this summer. I even learned a new word: rosarian. Whether I become a rosarian or not doesn't matter, what matters is if the pursuit brings me joy.

A few weeks ago, I was brushing my teeth and peered out the window that overlooks my patio. A pop of pink caught my attention and I gasped! There in the area where I'd planted zinnia seeds, and plants had grown and then stopped budless, was a single flower. Immediately, I heard a message from the garden that applies to all areas of life: Do not give up on the slow stuff of life. While there's a general timeline for things, babies, oil changes, summer vacations; some things happen in their own sweet time.

I, for sure, am an example of a late blooming victory. Why not the zinnia? In that moment, I recalled the thought I'd had as I was spreading mulch around other areas of the patio. Perhaps I should just pull out all those would-be flowers now. And then I looked around and saw that somehow, with those plants in the ground, other weeds had stayed away, and that was enough to convince me to keep them where they were and to mulch at the end of the season. Boy, am I glad I didn't listen to my first impulse. I would have missed the beauty, the message, and the flowers. Since that early Sunday morning, four more blossoms have bloomed with others on their way! 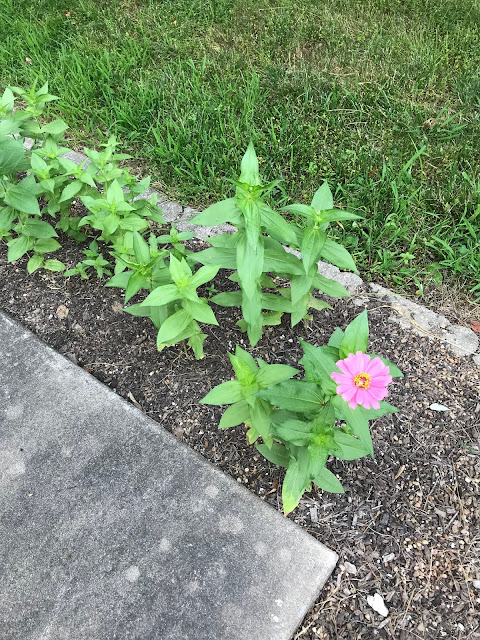 I have been presented with some new interpersonal challenges lately. Given the circumstances, avoiding the problems has not been an option. It's been exhausting and frustrating, but what has brought me joy is a new level of self-awareness that the skills I've been building in the past few years have taken root. I am growing in competence and confidence to address issues that arise and to do so with calm, wisdom, and kindness.

The final thing I've found bringing me joy is my ability to take care of things while they are still small tasks rather than choose to do them later, when they're likely to become bigger jobs. I see the value in washing the five dishes I used at our meal now rather than waiting for two more meals' worth of dishware to pile up. I respond to correspondence sooner, and I put things away or file them when there's just a few things. Doing it this way frees up my schedule and my mental space. I do it now, and then I don't have to feel weighed down by stuff that's waiting to get done.

Noticing these things and fully appreciating them has really improved my life satisfaction as the aforementioned interpersonal stress has threatened to wear me out. We get to choose our responses to the things that come our way, and I am choosing joy as often as possible.
Posted by Julie Steele at 4:00 AM