Before I became a mother, I watched the way other families celebrated their babies' first birthdays and was overwhelmed. Friends and family gathered and gave these babies a ton of stuff. I had an immediate reaction. I'm going to do something different when I have a baby.

As I planned Cadence's first birthday,  I invited a lot of people.  I HAD THIS AMAZING BABY I WANTED TO CELEBRATE!!! But I knew this baby had everything she needed, so I turned her birthday celebration into an opportunity to do something good for others in honor of her birthday. I identified an organization that accepted pajama donations, so we held a pajama drive. This gave our guests a more productive way to direct their generosity and didn't create the awkwardness of coming to a party empty handed.

That year, we collected more than 40 pairs of pajamas for children in need. Every year since (except for birthday two when we celebrated with only immediate family) we have chosen an area non-profit to collect items from their wish lists.

We've collected canned foods, diapers, wipes and baby supplies, and school supplies.  Years five and six were difficult. "I want the presents," my budding philanthropist would say. I would explain to her that she was getting presents from generous family, but that for her birthday we were celebrating with friends and asking them to help her make lives better for young children in our area. In those years, it was a hard sell, but I persisted. I saw too much good coming from it for her and for the recipients. Plus, our children have too much stuff as it is. She didn't need these things.


At one point the hard sell was with her dad. He argued that she was such a good girl who never asked for anything. I reminded him that it was this birthday tradition that was shaping her into such a girl who thought more about her friends being a part of her celebration than what she was getting. I also reminded him that he didn't want the stuff coming into our house. He relented and the unique approach to birthday parties continued.

At age eight or nine, the tide shifted. Cadence came to me. "Mom, who are we going to support for my birthday?"

I made a big deal of that fact that as the birthday girl, it was her honor and responsibility to choose the cause and the collections.  She always chooses the needs of small children. Last year, she collected items for the Little Bit Foundation whose mission it is to break down barriers to education for St. Louis public school children.

This year, she wrote the following script, read it during announcements at church, and invited her congregation to support the cause:

Every year for my birthday I try to collect different items for the little bit foundation (www.littlebitfoundation.org). This year I wanted to invite you to help me! If you don't know what little bit foundation is it is a organization that helps children to make sure education is there for them. I always go to there warehouse to help. I have been getting to know the staff and I would like to donate stuff like the past years. This year I am going to be collecting items such as: socks, underwear, toothbrushes, and gently used or new stuffed animals. Thank you. CM

I was stunned by the initiative she took to include other people in her collection cause. And bless them, they responded!  As did her birthday party guests.

I asked Cadence what she thought of me delivering her donations on my lunch hour. I was certain I knew the answer: "No, I want to go with you to deliver them."

Actually, I want her with me too. In past years, she carried in her collected items into the kitchen of the St. Louis Crisis Nursery. There she saw children eating their dinner. "Are those the children who don't have anything?" she whispered. I shushed her, nodded, and whispered back that we'd talk about it in the car. In that moment, what she was doing became real to her. Even if she was only five. I kept my promise and we discussed how the crisis nursery helps parents when they are having a hard time take care of their children.

This birthday tradition has opened my daughter's eyes to the needs of others. This year, the evening after she'd passed out the invitations and discussed the donations with friends she told me, "My friends asked if they could bring me a gift in addition to a donation. I told them they could, but that these kids need this stuff more than I do." In addition to these birthday drives, Cadence is exposed to the reality of hunger through the back pack program our congregation supports and that children sometimes grow up in difficult situations as she watches two of her favorite people become foster parents to two precious boys.

My daughter has an enormous heart. She is always sharing what she has with those around her. It is such a natural thing for her. Bless her heart, she doesn't know anything different. This practice has helped her to understand how good it feels to share and that there's enough to go around. She doesn't feel threatened by the idea that sharing will diminish her experience. In truth, I can tell it's had the opposite effect.

Generosity of spirit is one of my favorite human qualities and my daughter has it in abundance. 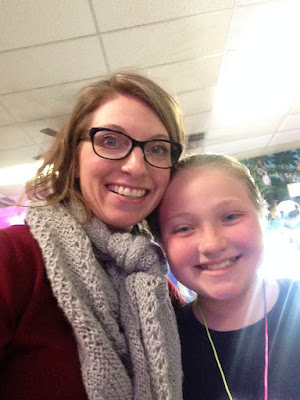