One of Thousands - Reflections on the Women's March

To begin, I don't like crowds. Too many people in a confined space provokes mild panic.

Secondly, Cadence was going to be with me on Saturday. I wasn't sure how I felt about taking her into the crowd.

Then a friend asked me if I was going. I expressed the concerns above, but knowing she was going gave me courage to consider it.

And then I read the following words from the writer-mama-mentor-activist, Glennon Melton Doyle, who reminds me that We Belong To Each Other and We Can Do Hard Things.

My decision was made.

As I described to Cadence what Saturday's march would be about, I concentrated on our celebration of girlhood and womanhood and wanting an equal opportunity for everyone. Since we live in St. Louis, and she remembers the events of Ferguson three summers ago, I didn't want her to confuse the two and be frightenened. And I prayed that the Women's March would be peaceful.

We'd discussed her wearing her Girl Scout vest at the suggestion of our friend, a Girl Scout leader for her daughters. Friday evening we bought poster board at Target. I asked her what positive messages she wanted to convey on her signs. What immediately came to mind was:

Who Runs the World? GIRLS! (Thanks, Beyonce!)

And then without prompting, she turned the GIRLS into an acrostic.

I was blown away. 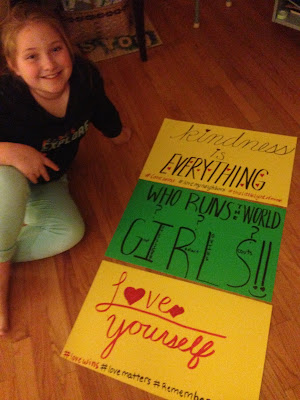 We met our friends at the metro stop near my office. A crowd formed and grew around the ticket kiosks. There was warmth, positivity, and community coursing through these people. The crowd was a diverse mix: women of every age, husbands, mamas pushing strollers and wearing their babies in packs. Cadence made a new friend as our group grew with friends of friends. 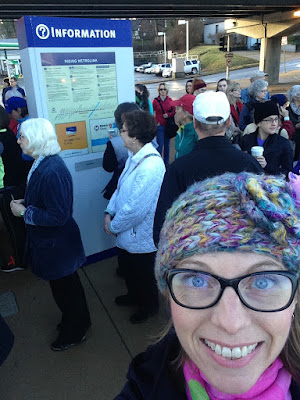 An older woman held a ziploc sandwich bag full of colorful lapel pins. She handed Cadence and I a pin. A souvenir for our pin collections!

With tickets in hand, we walked down to wait for our train. The 8:10 came. It was so full of people, there was no room to squeeze on. We kept talking and waited for the next train. The long wait tested the mettle of our little girls. I reminded them that we weren't missing anything. The crowd here was a good sign. It meant people cared about their concerns and hopes for the future. More trains came and left, packed, without us. On our fifth try, we boarded the train and joined the masses.

When we got to Market Street, we were welcomed by event volunteers. They told us that the march had just started and was a few blocks ahead. We started walking down the middle of the street. The girls shared our signs and we began taking in the experience. 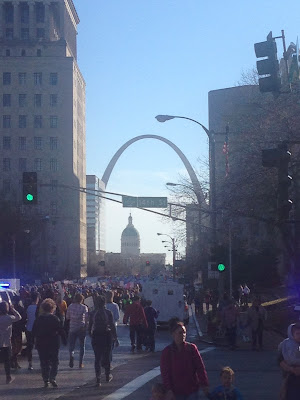 It didn't take too long to catch up to the crowd. Signs were everywhere. The sentiments were deep, passionate, smart, and funny. I was in word nerd heaven. [My favorites: We are the granddaughters of the witches you couldn't burn. And a sign with arrows pointing in all directions that said I'm with her.]

Before the ultrasound determined the sex of our baby, I imagined what mothering the baby I was carrying would feel like. Did I want a boy or a girl? On the one hand, I wanted a healthy baby and so I didn't care if I had a boy or a girl. But as I dug deeper, I believed I was more comfortable with the idea of having a boy since I'd nannied twin newborn boys ten years earlier as a new college graduate. It was familiar territory.

I felt more trepidation about having a girl. It was more personal. I wanted to parent differently than I'd been parented. I wasn't convinced I could accomplish that. I wanted a different relationship with my daughter than I had with my mother. I didn't know how to do that. I was afraid of messing up. And then we learned our baby was a girl. And I was delighted and determined to mother her the best way I knew how.

As I marched down the street, these ancient thoughts washed over me. I was so grateful to have a girl. This girl. And to be sharing this historic moment with her. Loving and mothering her has been the catalyst for my own healing. She has taught me how to be confident, fierce, brave, courageous—for her and for me.

She was the only girl we saw wearing a Girl Scout vest, and she was a hit. Multiple women approached her as they passed us, “We are SO glad you are here! Being a Girl Scout is the best! We are so proud of you! May we take a picture of your sign?” 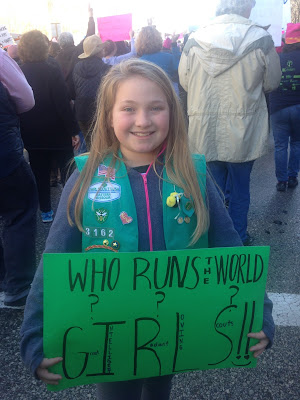 As we walked, I couldn't help but think of the suffragettes three generations before me. How they paved the way for today's women in so many ways. I thought of their bravery and courage. How their fight for the vote had been such a long, violent struggle. It brought me to tears.

“Cadence, I want you to pretend your brain and eyes are a recorder. This is a really big deal and especially to be a part of it when you are nine. Take it all in. You are going to remember this your whole life.”

My daughter walked with her sign above her head with the message facing backwards. When I suggested she turn it around, she reminded me, “I'm holding it up for the people walking behind me. They're the ones who can see it.”

We arrived at the end of the march where the rally began and found a spot to stop and rest. We took in the crowd and tried to hear what was being said over the PA system. The crowd was remarkable. Smiles were on everyone's faces. The sense of community and goodwill was palpable. We lifted our girls onto the window sill of the building so they could have a better view.

After a bio break for the girls, we decided it was time to head home. I was worried about a feeling of letdown as we made our way back to the metro stop, but the good vibes continued as we made conversation with women and reflected on what we'd just experienced together. Two days have passed and I'm still thinking about the experience, and so grateful that I stepped out of my comfort zone to experience history.
Posted by Julie Steele at 4:59 AM