I had a panic attack today.

They don't surface often, gratefully, but when they do, I am rattled.

My chest tightens. My breathing labors. I have a Rational Voice in my head telling me that none of the worries that have brought on these physical symptoms are serious or life-threatening. The Irrational Voice responds, "Yes, RV, I am well aware of this. It doesn't matter. I am currently in no position to talk myself out of this scary, circular, mess of an internal monologue."

I know how it happened. I've spent the past two weeks dealing with car troubles. These circumstances cracked open my vulnerabilities. I remained mostly calm and composed, but it took it's toll on me. Then in my exhaustion, I said yes to an invitation I knew I should have said no to. And then I felt another yes coming. These struck hard because I've been doing so well at my boundary drawing of late and these yeses or near-yeses felt like self-betrayal.


During my panic attack and the hours that I was a muddled mess, I kept asking myself What Would Glennon Do? Glennon reminds us that We Can Do Hard Things and that our pain is where our lessons and the good stuff of life can come from, but we have to dwell there for a spell. I didn't ask people what to do, an old tactic. I opened my journal and wrote down all the things causing this physical and emotional tension. Writing always clears the cobwebs. I also breathed deeply, prayed, and trusted that the right answer would come and the tension would ease. I was right. My chest loosened and my breathing returned to mostly normal.

With a clearer head, I cancelled the plans remembering that no was the answer I should have given days ago.  This was a pop quiz, and it was okay to not ace it. I've aced a lot of other emotional pop quizzes of late and perfect scores are not the goal. Only learning lessons matters. Sometimes it takes extra practice to master the material.

I knew that saying no was creating space to say yes to my writing life, which has the power to heal and restore like nothing else does.

I spent the afternoon away from the office with colleagues at a team-building event. One of the breakout sessions was a version of balderdash--a game where each player gives an exotic word a definition and then the person whose turn it is has to pick their favorite definition and compare it to the actual definition. This word nerd loved it and learned several new ones including: 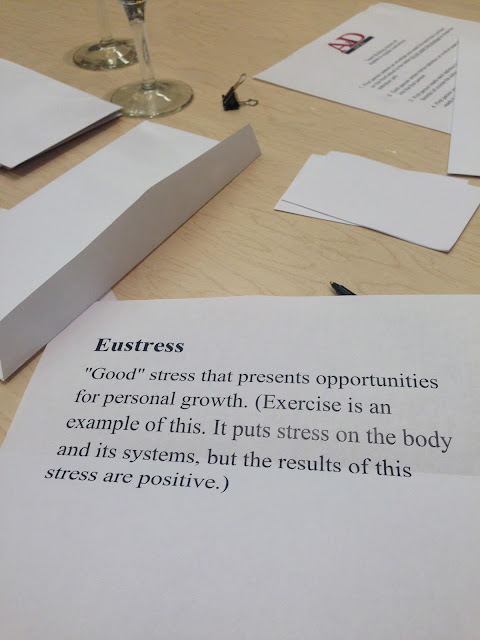 Today's panic attack and the resulting reflection is a perfect example of eustress. They provided me with an opportunity for personal growth. Facing my yes and changing it to no taught me the importance of listening to my needs. Of the importance of making decisions for the right reasons, which do not include people pleasing--the source of this particular yes.

This eustress also led to brainstorming what I need creatively.  Rob Bell often talks about creating that thing you need instead of waiting for it to appear. As I drove my newly repaired pathfinder home, the Honey Locust Creatives' Collective was my answer to what I've been seeking: creative space that welcomes and encourages creatives in their particular pursuits. I have no idea what will become of it, but I do know a lot of creatives: writers, painters, designers, knitters, to name a few. I want to create space for us to live and express ourselves creatively.

This weekend the Honey Locust Creatives' Collective is a retreat-for-one taking place in my bedroom. Maybe some day it will be a retreat for others--or not. It doesn't matter. Tonight it's feeding my soul and creating the space for me to feel supported as I plan to write on and off from now until Monday when I return to my day job. 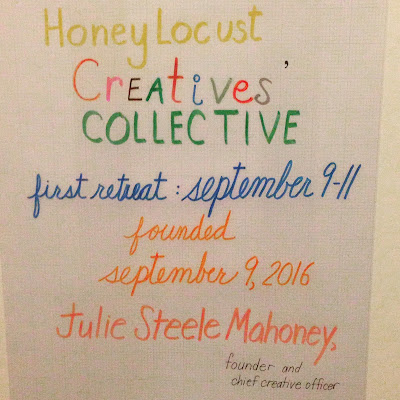 Email ThisBlogThis!Share to TwitterShare to FacebookShare to Pinterest
Labels: Word of the Day