New growth in the garden

I spent much of the weekend binge watching Mad Men before it’s removed from Netflix. As protests and unrest erupt across the country, the story line of this period drama landed me in the burgeoning tensions of the mid-sixties. One episode focused on the characters’ reactions to the assassination of Martin Luther King, Jr. It was striking to listen to the dialogue as the white and black characters navigated that national tragedy 50-some years ago. It is shameful how little has changed in the intervening years. So much of what is written on social media today is an echo of those struggles decades ago.

I paused the show and spent some time on social media where I felt the heaviness of retweets, videos of violent police and community interactions, and the heartbreak of black communities near and far. I noted the white friends who declared their allyship, and considered the monumental work all of us have ahead of us to make America’s racial disparities a thing of the past.

I laced up my work boots, grabbed my garden gloves, and climbed the treacherous slope of my rocky property to get a break from too much screen time. I surveyed the Russian sage I planted last year. I was attracted to its free-spirited shape, the muted purple of a Monet painting, and its perennial attribute to spread.

Tonight’s goal was to weed the area around my sage bushes to prevent the weeds from choking out new growth. As I tore out the wild onion and ragweed that encroached on the sage’s territory, I thought about how these plants and weeds are like the situation we’re in right now.

The sage bushes represent the best in us—our kindness, humor, compassion. The weeds are the fears, prejudices, biases, and untruths our culture has handed to us about white, brown, and black skin.

As I plucked the weeds from the loose soil, I prayed. For the mamas of my daughters’ friends. For my elementary friend who grew up to be a police officer. For myself as I to learn how to be an effective ally for my black and brown friends. For my daughter and her friends. For how they are not color blind, but see each other’s different skin colors and hair textures and celebrate those differences.

I want to weed out the old, toxic thoughts and beliefs that were sown in me by society. As I pulled the weeds in my garden, I was reminded of the effort this requires. I thought about how it doesn't happen overnight-literally or figuratively. Just like in my yard, it is important that I don't get overwhelmed by the size of the task. What is important is that I keep showing up in little ways every day. Pull a few weeds, text a friend, read a book and talk to other white friends about what I'm learning. Over the course of a season, those individual efforts will grow into something fertile, lush, and beautiful. But only if I'm willing to do the work. In other words, my garden and I are works in progress. 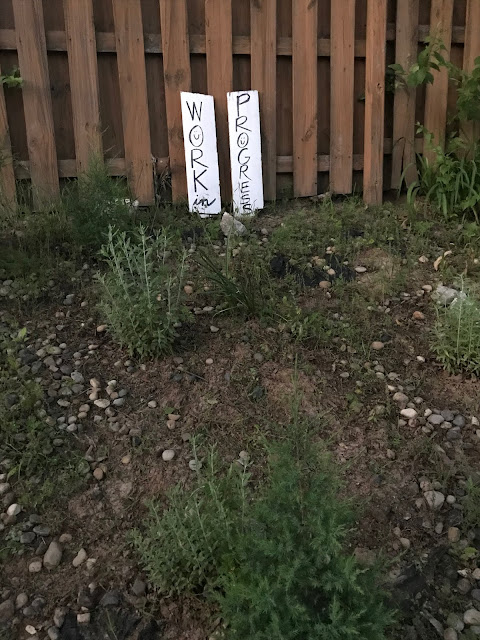